Reverend Protopresbyter Peter Karloutsos was born in New York City and is the son of the late Very Reverend Michael and Presbytera Olga Karloutsos. Fr. Peter is married to Presbytera Maria (Kletsidis), who was born in Kastoria, Greece and moved to Washington, D.C. with her family in 1961.  Fr Peter, together with Presbytera Maria,  arrived in Danbury on March 4, 1978 to serve as Proistamenos of the Assumption Greek Orthodox Church located on Farview Ave. Their daughter, Michaele, was born in Evanston, IL during the time Fr. Peter served as the Assistant Priest at Saint Andrew's in Chicago, IL(1975-1978). Their sons, Konstantine and Fr Nikolas were born in Danbury, CT.

Fr. Peter graduated from Middletown High School in Middletown, OH in 1965 and entered Hellenic College in Brookline, MA to begin his studies in History and Pre-Theology.  He graduated with a BA from HC in 1969. Fr. Peter then worked as a substitute teacher in Boston Public Schools before moving to Orlando, FL in 1970 where he worked construction at Disney World.  June 27, 1971, Fr. Peter and Presbytera Maria were married. In September of 1971 Fr. Peter entered the Holy Cross School of Theology in Brookline, MA to begin his studies for a Master of Divinity degree, graduating in 1974.  From 1974-1975 Fr. Peter and Presbytera Maria lived in Thessaloniki, Greece where Fr Peter entered an intense Greek Language program at the University of Thessaloniki on a grant from the Taylor Scholarship Foundation.

September 4, 1975 Fr. Peter was ordained a Deacon by Archbishop Iakovos, of blessed memory, during the first National Clergy retreat held at the Holy Cross School of Theology. In attendance were four Hierarchs and 183 priests from throughout the Archdiocese. For Fr Peter, it was a deeply felt emotion of humility and an honor to have that many clergy proclaim AXIOS (Worthy).

On October 1, 1975, he was assigned to Saint Andrew Greek Orthodox Church in Chicago, IL and was ordained a priest on October 19, 1975, by the late Bishop Timothy of Chicago.  In 1987, Fr. Peter was awarded with the Offikion(Honor/Title) of Sakellarios by Bishop Athenagoras of Dorylaion (now Metropolitan of Mexico and Central America).  Archbishop Iakovos, of Blessed Memory, presented the Pectoral Cross to Fr. Peter given with the Offikion of Economos in 1991.  Metropolitan Methodios, at a ceremony at the Holy Cross School of Theology, with the Blessings of Patriarch Bartholomew of Constantinople honored Fr Peter with the Offikion, Protopresbyter of the Ecumenical Patriarchate.

In 1979, the year after Fr. Peter was assigned to the Assumption Church, the First Annual Greek Experience Festival was inaugurated that launched the plans to buy property and to build our beautiful Byzantine Church. During the early years in his Ministry, many programs were established for our youth, seniors and all ages of our Parish.  In 1983, we left the Farview site to begin worship in our Byzantine Church on Clapboard Ridge Rd which stands as a beacon on a hill overlooking the city of Danbury.

Fr. Peter served on the Archdiocese Benefits Committee from 1994-2000, four years as Chairman of the ABC and two years as Chairman of the Administration Committee of the ABC.  Fr. Peter was elected President of Hellenic College/Holy Cross School of Theology Alumni Association, from 1999-2004.  In addition, he was a member of the Board of Directors of HC/HC from 2000-2008, serving on the Executive board for six years.  Representing the Alumni Association, Fr. Peter was a member of the Archdiocesan Council from 2000-2005.  Fr. Peter served a two year term, 2014-2016, as President of the Saint John Clergy Syndesmos of the Direct Archdiocesan District and as the DAD representative to the Archdiocesan Presbyters Council. Also, he was President of the CT/Westchester Orthodox Clergy Fellowship from 2012-2015 and Treasurer of the Hudson Valley Three Hierarchs Ortodox Clergy Fellowship from 2011-2020. Fr. Peter served as volunteer Chaplain for over 35 years at the Federal Correctional Institution in Danbury, CT and visited inmates in various Federal and State prisons in Connecticut, New York and Pennsylvania. Throughout Fr Peter's Ministry in Danbury, CT he has been active in many Civic and  Ecumenical Church organizations and programs serving the Greater Danbury Area.

Continuing to minister to the Assumption Church Family, Fr. Peter and Presbytera Maria feel blessed by the love and support of our faithful parishioners and to have their children and grandchildren so much a part of our Parish.  Michaele and Dr. Efstathios (Steve) Giannoutsos have three daughters; Yana, Maria and Sofia.  Konstantine and Erin (Skelly) have three children; Peter, Evangelia (Lia) and Michael.  Fr. Nikolas, who serves as Dean of the Holy Trinity Cathedral in New York City, and Presbytera Meghan (Skelly) have three children; Thomas(Anastasios), Kalliope and Lucia. 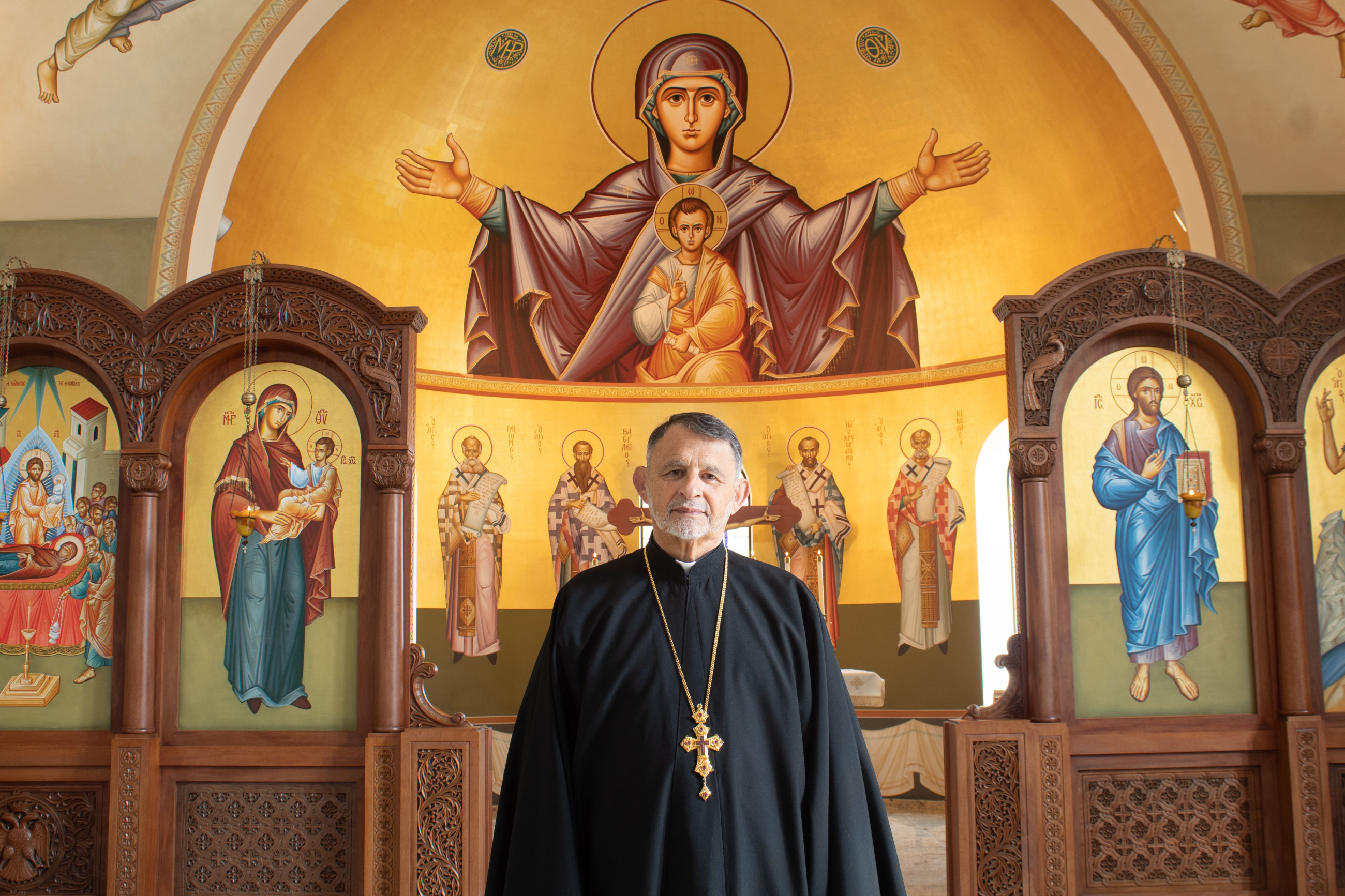